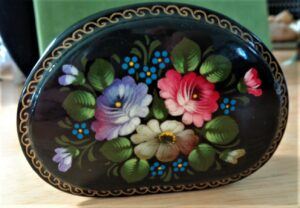 Some talented Russian artisan created this lacquer box. Originally, the use of lacquer-ware began in China, later spreading throughout Asia.

Starting in 1721, Peter the Great ordered 90 lacquered tiles for the Monplaisir Palace in St. Petersburg. By the 18th century, when tobacco became affordable, lacquer became an inexpensive material for making snuff boxes.

In 1795, the first Russian lacquer factory began in the village of Fedoskino. Generations later, it was still going strong. Other villages took up the creative endeavor.

The boxes are made of papier-mache. To paint the design, the artist uses very fine brushes. This box measures 2-1/8 inches wide and three inches long at the longest spot. It measures 1-1/2 inches high.

As this box was taken in a trade, the price is very reasonable.

There are no reviews yet.

Only logged in customers who have purchased this product may leave a review.